To start the show, Drex O’Dell came out with his manager, who berated Drex for being an embarrassment at the last show, where he wrestled without his partner Mustafa and lost. 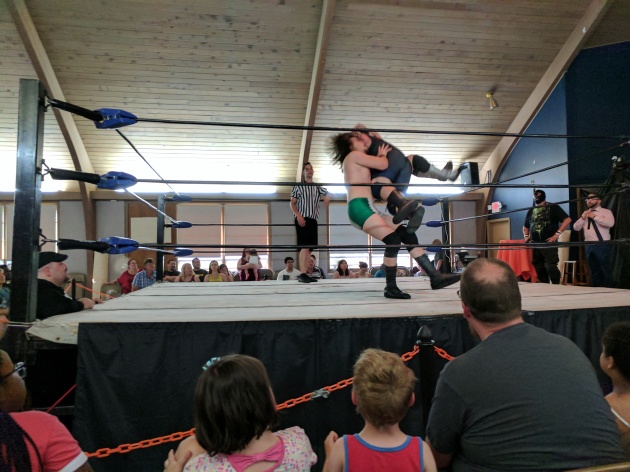 His manager (you’d think I would have learned his name by now!) said that he went out and found Drex a different partner for tonight to get different results.  That partner:  The Punisher.  The opponents: The Bambino Family!  During the match, The Punisher stepped aside when Drex needed some help with a tag; Drex tried his best (see the pic to the left where Drex is working hard and Punisher is standing off to the side taking the rest of the match off.  Eventually Drex got pinned.  After the match, Punisher came in and decked Drex with a chain-wrapped fist.

The next match featured Austin Fury against an unnamed (at least for me, maybe he was introduced but I missed it) masked opponent.  Austin won pretty quickly, and then got on the mic and asked for some better competition.  Out came Roach!  Roach and Fury tore the place up until the bell rang to announce the end of the 20 minute time limit.  It’s a draw!  One pic below shows Austin dropping onto the unnamed opponent in black, and the other shows Fury getting dropped on by Roach. 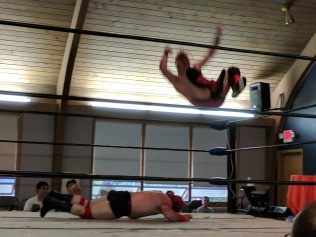 Next up we had The Cavalier Club of CK1 (with no fancy robe, booo) and Stone Hands Slater Wallace taking on Flash Harris and his partner … Mike Strong?  I know his 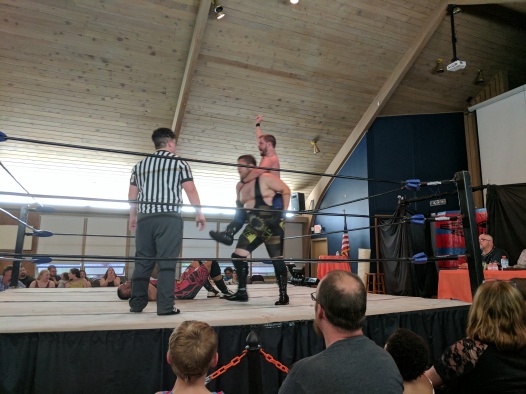 name was Mike because Flash got the crowd to chant Mike! Mike! Mike!, and he had “Strong” down his tights.  Here we saw lots of dastardly heel work, ref distraction, and temper tantrums from The Cavalier Club, and they eventually got the win.  Here they celebrate afterwards.  Giddy up.

Johnny Motley defeated Kyle Cross in a good match, then got on the mic to demand higher level championship opportunities.

In the final match, Jeremy Hadley defeated Flawless Dave Allen to retain his FPW Heavyweight Championship.  The quote of the night came from Dave Allen, who yelled – having just kicked Hadley in the face – “Now that’s how you kick a dude in the face!!”  After the match, the Cavalier Club ran out to beat on Hadley.  When the FPW general manager got on the apron to give Allen the business about all these shehanigans, Allen slapped him (wow, it was a loud slap!) and drew a 30 day suspension for that.  Since FPW shows are a month apart, I’m expecting we may see Dave Allen back and still up to no good at the next show.

Now this was the first local show I dragged my wife and kids to, they agreed to go along since the next day was Father’s Day and this was their king’s wish.  They all said it was better than they thought it would be 🙂 ; I checked with my daughters for their reactions, and here is a summary of the categories I offered and their answers:

Pro Wrestling King (PWK) held A Sudden Impact on Skull Island at Bourbon Park Pavilion in Bourbon, IN at 7:30pm Saturday June 17, 2017.  I’m pretty sure that in the planning meeting, one group wanted to call the event “Sudden Impact” because of the two Impact Wrestling starts scheduled to appear, while another group was like, “Hell no, we’re calling it Skull Island, because, you know, Kongo Kong is on the show!”  Their fight over the matter went to a time limit draw, and thus we have the title we do.  Either that, or Eric King just likes to have fun with his titles.

The “pre-show” match that started at showtime was Jackie Chen vs. Tank.  Here is Jackie

Next out was Cletus Farmer and JC Bunyan vs Team Legend-Dairy.  I don’t know what he ever did to them, but The Section was giving Bunyan the business!  It seems to me that all four of these guys should be in a stable because of their farm and forestry related themes.  (Get it?  Farm related … STABLE?  Nevermind.)  Cletus and Bunyan came out to what may be the most visually disturbing entrance video I’ve ever seen.  Seriously, what’s up with that rabbit?  Oh, by the way, Team Legend-Dairy got the win.

Jayden Quick and Jordan Quick had an intense battle of brothers, in which Jayden came out the winner.  Thanksgiving must suck at their house.  Jordan promised another match would come along.

Special guests DJ Z and Robbie E came out as The Bro-Mans to take on Pat Monix and KLD (Kevin Lee Davidson), making their first (?) PWK appearance.  Monix provided the mouthy sass of that team, and KLD provided the “holy crap, I do not want to run into him in a dark alley” part of the team.  The Bro-Mans took the win to make everyone happy.  Here you can see them turning KLD upside down, it took both of them to do it: 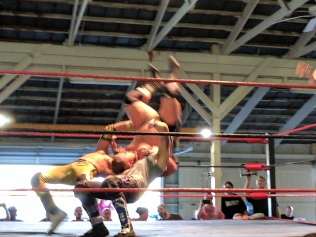 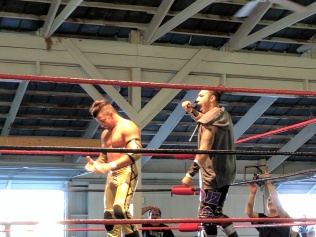 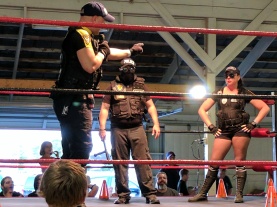 now that I’ve seen them both in the same place at the same time, I have to reconsider.  Dammit.  As an aside, I’d like to send out a belated Happy Father’s Day out to Shady Chris Xion since it looks like his baby came just in time for this one.  (You learn way more than you probably should about people’s personal lives from Facebook, you know?)

The Clean Cut AntiChrist Adam Bueller beat Lightning Bolt Johnson for the PWK Michiana On-Line (and Out of Sight) Championship.   After battling in hard-hitting fashion for a while in and around of the ring (where even a Rock action figure got involved), they took it outside the pavilion, with a large segment of the crowd following them out.  I stayed by my seat because the fan blowing near me felt too good.  I understand a dumpster also got involved before they came back into the ring.  Here Bueller crashes onto LBJs back while LBJ ponders what career choices have brought him to this moment.

After a great match, Nick Cutler got Matt Knicks to submit.  I really had fun watching this

match; both guys were very fluid and put together nice sequences.  There were some seriously loud knife-edge Ric-Flair-whooo chops in this one, and it seemed from his reactions that Referee Tony Lynn felt them more than Cutler and Knicks.

In the final match, Fireball – god bless his hearty soul – tried to knock off Kongo Kong.  I’ll give him credit, Fireball actually got Kong off his feet three or four times, but eventually this happened (see picture below).  If Kong likes you, he’ll shake your hand after he flattens you into a pancake.  If he doesn’t …. well, that’s better left to the imagination. 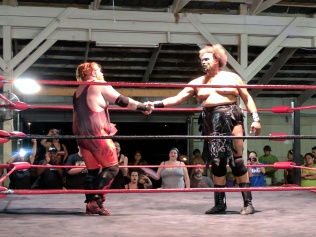 PWK had another card the next night at the same location, you can see Eric King’s Facebook page for a list of results.

ARWPRO was Live in the ‘Ville – Hessville, that is – on Sunday June 11, 2017 at 2pm under a 93-95 degree blue sky.  And on a black-top road surface.  So yeah, it was hot.  This event was part of a 3-day community festival in Hessville on Kennedy Ave.  If you haven’t sat in the middle of Kennedy Ave on a 95 degree day to watch wrestling, you haven’t lived.  It looks like this town party grew from an “every Saturday night for a month” thing to “screw it, let’s just shut down Kennedy Ave between 165th and 169th for three days straight!”

Well, this event was more of a wrestling exhibition than a full on 2+ hour show, which is

good, because sitting in that heat any longer would have been unbearable.  I did start the show off right, though, by getting a yummy cupcake from the Weekend Baker‘s truck right next to the wrestling area.  There was a pierogi truck a ways farther up too.

The first match was the artist formerly known as Rancid Joey Rak vs. Dakota Prodigy.  Joey was introduced by Uncle Charlie as “the twig on a branch of the family tree” which drew a few “Twig!” chants through the match.  After   some punches and flips, Dakota 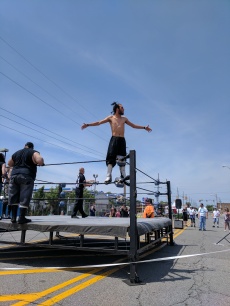 injured one of his arms and left the ring to seek attention.  The ref had no choice but to count him out!  So The Twig got a relatively easy victory.  Hopefully when Dakota has recovered, he’ll get another chance at a Family Feud.  This picture to the right shows him when he had two working arms.

Match 2 had the newest Family member X-Caliber take on Santana Starks.  Since it had been proven at a previous show that the Masked Cubbie was not Starks, no matter how badly Dante DVS wanted it to be, the ARWPRO owner King Bishop has re-instated Starks to make up for him being unjustly accused of shenanigans. In his first match back, though, Starks went down to X-Caliber, and the Family is 2-0 on the card so far!

In Match 3, the Arabian Sheik tried to win the ARWPRO Heavyweight Title from Max Holiday.  Silly man.  The Arabian Sheik came out with headwear, bright green Saudi Arabian type flag, and – most importantly – pointy toed boots.  It didn’t take Max long to finish him off. 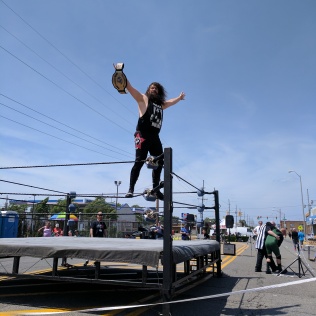 Match 4 was a tag team match, The Picture Show vs. newcomers R.O.W.  I did not catch what R.O.W. stands for.  They were a lot of fun, had good interaction with the crowd, and I want to see them again … maybe in a battle of the entrance music with Mr. 3% Jon Hudson. This was probably my favorite match of the night.

Match 5 was a Battle Royal, in which just about everyone who had wrestled already came out (except Dakota; get better soon, dude!) with a couple of people who had not been on the show.  There were about 8-10 people altogether, I think.  The winner after about 10 minutes was OSM, Old School Manson – making the Family 3-0 … not bad for a day’s work, I think Charlie deserves a raise! 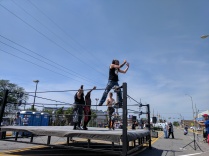 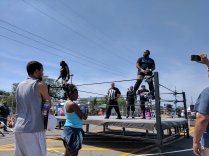 The next ARWPRO show is on Saturday July 9, at their usual Lake Station American Legion home base.