Revolution Championship Wrestling (RCW) held the Revolution Rumble at 7:00pm Saturday September 15 at the Century Center in South Bend, IN.

The Century Center is a really good place to see a wrestling show … mostly.  I like the auditorium style seating.  I don’t like the absence of hot dogs.  The arena has a good capacity, and so crowds can look pretty thin, but I think if this event was back at the usual Battell Center, it would have looked quite full.  The crowd was quite vocal, regardless.

The first match was a Five Man Mayhem Match, featuring Scotty Young, Anthony Lee, Jeremy Hadley, Mojo the Voodoo King (I like the name “Mojo McQueen” better), and Tank.  The idea here was the winner of the match would get the final spot (#25) in the Revolution Rumble, and the loser (the person getting pinned) would get spot #1 in the Revolution Rumble.  (See, now I just talked about the Rumble, and I did not specify I was talking about the Revolution Rumble MATCH rather than EVENT, and yet I’ll get it made total sense to you anyway.  See?  We can do it!  Take note, WWE.)  At some points in this match, all five were slugging it out in the ring, and other times a couple of people would be laid out outside the ring, leaving only two or three in the ring, so the pacing stayed sharp and something interesting was always happening.  Below, left, Hadley and Young team up on Tank, while and Lee takes on Mojo.  Below right, Tank topples a tower of doom, slamming three other people at once (Jeremy Hadley was smart enough to stay out of the ring for that one).  Mojo the Voodoo King won this match by pinning Anthony Lee.

Next, Melanie Cruz defended her RCW Women’s Championship against Samantha Heights.  Normally I’d cheer for Cruz, but Samantha Heights is from Cincinnati, and so I have to go with my hometown girl.  But, much like the Bengals and the Indiana University Hoosiers, my support is a curse, and although Heights overcame some brutality from the much larger Cruz and mounted a comeback, she was met with a big boot to the face and got pinned.  Below left, we see Cruz dragging Heights back out from under the ring; I think Heights lost a contact lens down there, and was going under the ring to look for it, but Cruz didn’t let her; if Heights’ vision was impaired, that gave Cruz an unfair advantage!  Below right, Heights launches an aerial attack onto Cruz.  Cruz may or may not have just caught her in mid air and thrown her down.  That’s not the point, look at the high flying style of Heights!  (See, I’m trying really hard here for my homework hero!)

Match 3 was Douglas Stout vs Kevin Storm for Storm’s RCW United States Championship.  Kevin Storm was still remembering what Stout did to him at the last event, and attacked Stout immediately by coming to the ring and launching a suicide dive onto Stout, who had cleared the ring for Storm’s entrance.  Soon after, Storm got the referee to turn towards the audience, and landed a low blow on Stout, repaying him for that very action.  The match ended when Stout’s valet Nicole distracted the ref and slipped her purse to Stout; the purse must have been loaded with all their loose change, because one whack with purse KO’d Storm.   And so Douglas Stout is now your RCW United States Champion.  Below right, he admires his new prize.  Below left, Storm lands a dropkick earlier in the match. 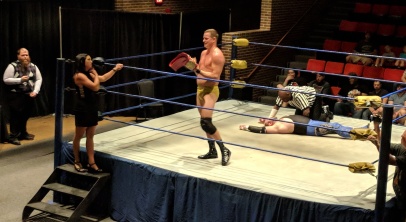 Next, Brian Pillman Jr (also from Cincinnati!) took on Noah Walker.  Walker put up a good fight, but Pillman got the pin.  Below left, Pillman leaps over the top rope on his way to kick Walker in the face; below right, Pillman admires the work of Walker.   Being from Cincinnati, Pillman displays good sportsmanship.

After intermission, the second special guest appeared, and we had Brutus Dylan taking on Madman Fulton (most recently AKA Sawyer Fulton).

Dylan and Sawyer were evenly matched; below left, they both pause for a breather after a long sequence of matching each other move for move.  Sawyer also got his heart-rate up by trying a few power moves on Dylan; gravity in South Bend must be stronger than he’s used to, and he had trouble getting Dylan up on the air a couple of times.  On the other hand, he was able to jump pretty high; below right, he’s coming off the ropes to kick Dylan).  Dylan eventually got the pin. 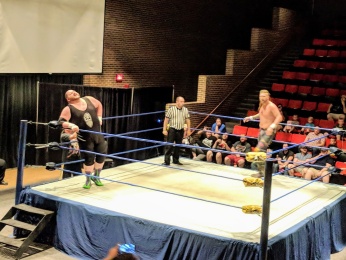 Next, it was time for the Revolution Rumble!  (And I’ll bet you know that I’m talking about the actual rumble match, and you’re not confused that the actual event is just now starting … suck it, WWE!)  This was a 25-man over the top battle royal with entrants coming to the ring in one minute intervals.  I tried to keep track of the order of entrants and elimination; when a lot of people got eliminated close together, I may have gotten a couple of pairs out of order, but I think overall the list is OK.  The names are in order of entrance, with the order of elimination in parentheses.  The winner of the match would face Nick Cutler afterwards for the RCW Heavyweight Championship.

Note that Nick Cutler was in the timekeeper’s area for the match, offering commentary as he saw fit.  He was particularly obsessed with stressing that since the match is no-DQ, there should be lots of crotch shots.  He encouraged many of them.

Brutus Dylan eliminated everyone left in the ring when he entered, so that he was alone when The Polish Heartthrob came out.

The end of the match got a bit confusing.  The final three participants were Anthony Toatele, Scotty Young, and Russ Jones.  After their eliminations, Tank and Mojo kept going at it outside the ring, causing a distraction.  It looked like Toatele had eliminated Jones on the far side of the ring during the distraction; but either both feet never hit the ground, or he just took advantage of the refs not seeing it, because he re-entered shortly after.  Once Toatele and Jones were the final two left in the match, they got into a spot outside the ropes, on the apron on the near side of the ring.  Nick Cutler snuck into the ring and knocked them both off the apron and onto the floor.  His theory was that since neither of them won the match, he would not have to face either of them.   RCW GM Jon Blackwell disagreed, and his ruling was that now Cutler would have to face both Toatele and Jones, in a triple threat match for the championship.  Here, four participants survey the scene, and Tank might be getting eliminated.

During the main event, Nick Cutler tried to defend his RCW Heavyweight Championship from both Anthony Toatele and Russ Jones.  Each of Toatele and Jones got to take turns giving retribution to Cutler for interfering in the Rumble (Jones is getting his turn below left).  Cutler kept up his fascination with groins, yelling “Crotch!” a few times.  I see new t-shirt options in his future.  Eventually, Cutler was able to pin Toatele by using the second rope for leverage with his feet. 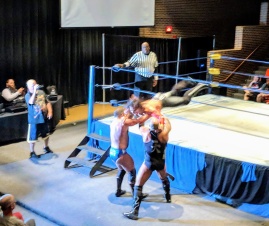 The next RCW show is Friday October 12 at the O’Brien Center in South Bend, IN.

If you’ve read this far, you might like wrestling?  So maybe, check out the Northwest Indiana Wrestling Action Program (NWIWRAP) broadcast Sundays at 9:15pm*, right after Mostly Metal, which runs Sundays from 8:00-9:15pm CST, on WVLP 103.1FM in Valparaiso, IN. If you’re not in Valpo, catch it streaming on http://www.wvlp.org and the Tune In Radio app. Rebroadcasts happen Wednesdays 10pm – midnight, and NWIWRAP is archived on YouTube, just search for NWIWRAP. You can find @nwiwrap on Twitter. And you can subscribe to the nwiwrap.wvlp@gmail.com Google calendar, where I try to keep up to date calendar postings of shows in and around the NWI region.

* or 9pm, or 9:30pm, or anytime before or after, depending on how much stuff there is to cover!