We lost this intelligent creature today, but he went peacefully and comfortably in his soft 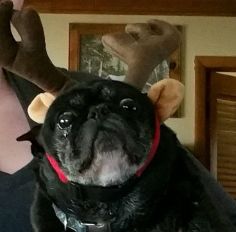 grey doggie bed.  What better way to distract from pet owner sadness than to write about wrestling!  (RIP Happy the Pug, we-have-no-idea-of-birthdate to May 22, 2017.)

This was a brave event to hold on this night, with Wrestling for Warriors to the east in Ft. Wayne, and NXT Takeover: Chicago to the west.  But several of the FPW regulars were there.  The first match was The Gypsy King Ritchie Rothchild vs. Fireball.  Fireball has 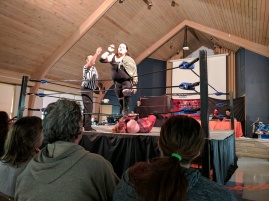 been showing up a lot in the South Bend / Warsaw circuit, and I think this was his first time at FPW.  Sadly, Ritchie had the home field advantage and won the match with a stunner.  I like the way Ritchie laughs villainously while he toys with his opponent.  Here, he is seen making sure Fireball does not get caught under the bottom rope.  (The Word Press spell checker is telling me that “villainously” is not a word, but fuck Word Press, what do they know?)

The second match was Nicco Antonelli vs. Jonas Keith.  Nicco’s entrace music was almost totally inaudible, and that was a problem for most of the night.  I’m pretty sure that Mr. Keith was last seen by me having his face smushed into the mat courtesy of Mustafa and Drex O’Dell at Fire Pro 132.  I’m glad to see he’s recovered.  Well, that recovery was short lived as Nicco won this match when Jonas went for a splash and missed.

Match 3 was a 3-way between Austin Fury, The Sleepless Gentleman Adam Bueller, and Johnny Motley.  Fury’s Impact Championship was not on the line.  So I’ve been trying to get my kids interested in coming to shows with me, but with no luck so far.  My older daughter, 15, says she’s not interested in sweaty fat guys with tights slamming into each other.  I decided to play the cute guy card, and showed her a picture of Johnny Motley; “Look at this guy, he’s not fat, and he’s a favorite with the ladies in the audience!”  My daughter replied, “Yeah, he’s hot, but he’s not Arrow hot”.  I’m sorry, Johnny, my daughter apparently has high standards and you don’t measure up to Stephen Amell. 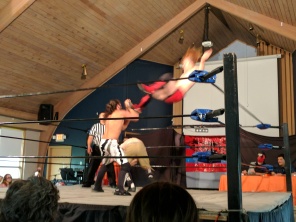 If you’re wondering what happened in the match and not my house, the three guys went back and forth in fun fashion for quite a while until eventually Motley pinned Bueller.  After the match, Bueller gave Fury a low blow.

You know your show is going to be short when the intermission comes after just half an hour.

After intermission, The Gentlemen’s Club (CK1 and Dave Allen) took on Stone Hands Slater Wallace and Flash Harris.  Poor Flash got worked over for a loooong time; CK1 and Allen played the sneaky tag team quite well, 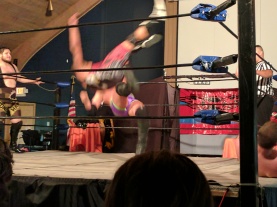 getting Wallace to try to come in the ring, and then double teaming Harris while the ref was busy shoving Wallace back to his corner.  To the left is Dave Allen gently setting Flash Harris down.  Eventually, Harris tagged in Stone Hands … who proceeded to slam his own partner Harris down to the mat.  The Gentleman’s Club now has a third member!  This turn happened before Tomasso Ciampa’s turn on Johnny Gargano, so for the record, FPW was first!

Because he knew the audience wanted more, Nicco Antonelli came to the ring and complained that his earlier match wasn’t enough competition, and he laid out an open challenge.  Out came … Johnny Motley, for his second round of the night as well.  The two smacked each other around until Motley won.  On his way to the ramp after the match, Motley gave a superkick to Antonelli for his troubles, and then a second one for good measure.

Our next feature was a wrestling match staged against a match between the ring announcer and his note cards.  Drex O’Dell, “from Massachussetts, England” had given his tag team partner Mustafa the night off, and was happy to take care of business on his own.  His opponents were either the Bombito Family or the Bambino Family, depending on whether you believe the ring announcer or their actual ring names.  Fresh off their appearance at the last ACW event, the Bambino Family are trying out more of the NWI scene.  Despite his eagerness to go it alone,  Drex O’Dell got pinned by the Bambinos.  I wonder what Mustafa will say when he hears about this?

Right before each main event, the pastor of Impact Christian Church comes out to invite the crowd to give his church a shot on Sunday mornings.  I think it’s cool that he does this, and really appreciate that he’s not pushy about it, but just like, “hey, you know we’re a church, and you’re welcome to come hang out with us”.  Tonight his invitation made me smile because he talked up the current lesson series on managing anger in the family … which is sort of funny at a wrestling show.

Our main event was Tank vs. Jeremy Hadley for the FPW Championship.  Tank’s another one who is usually seen farther east, and it was good to see him here.  One of the funniest / cutest scenes of the night was Jeremy Hadley’s daughter giving Hadley himself a big boo and thumbs down during his entrance, and chanting “Let’s go Tank!”  To impress the crowd, Tank gave us his rendition of “If I Were A Rich Man” from Fiddler on the Roof 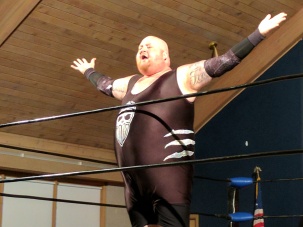 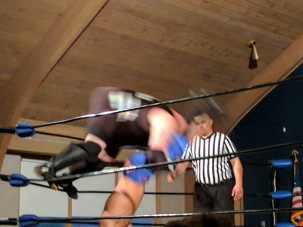 but then later Jeremy Hadley let Tank know that he sucked by dropping him from the corner with a Frankensteiner.  This was a terrific big guy / little guy match, with Hadley using speed and agility to strike at Tank, and Tank just clobbering the bejeezus out of Hadley.  There were lots of nice near falls to keep us guessing.  Eventually Hadley won with a big frog splash.  After the match, the Gentlemen’s Club came out and attacked Hadley.  I was hoping Tank would let his conscience get the best of him and intervene, but nope.  The Gentlemen’s Club left Hadley laying in the ring, as well as two refs who did try to regain some order.    In the spirit of selling the hell out of a good beating, Hadley and the refs continued to stay down while the crowd started filing out of the church. 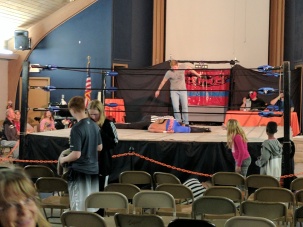 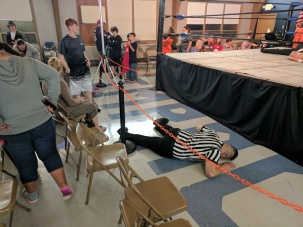