Revolution Championship Wrestling (RCW) held Full Throttle at the Battell Community Center in Mishawaka, IN at 7:00pm EST on Friday August 25, 2017.  I was really looking forward to this since it had been over a month since I’d last been to any show, and I needed my wrestling fix!

A pre-show match featured Fireball vs. The Celtic Nightmare.  Fireball does not appreciate Mishawaka or the RCW crowd like he does Warsaw and the FWF crowd, and made that clear.  The crowd got behind 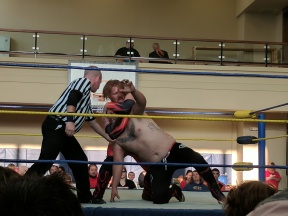 The Celtic Nightmare, who got the win.  As you can see in the pic, Fireball looks a lot meaner and nastier when his hair is down.

The main show started with Rod Street and Dru Skillz announcing they would team up to take on The Midwest Monsters later in the night, since the other half of The Soul Shooterz was unable to be there.  Or maybe Rod Street was going undercover on a different team.  Brutus Dylan and Tank don’t care who Dru Skillz’ partner is going to be, they know they will win regardless.

The first match on the show is a 6 man match under Lucha rules (Ring Announcer Ryan Anderson told us what that meant, and I’ll interpret:  people are going to be jumping in and out of the ring all over the place and no one really worries about rules).  After about 15 minutes of music and intros, Noah Walker, The Maltese Tiger, Adam Bueller, Jared 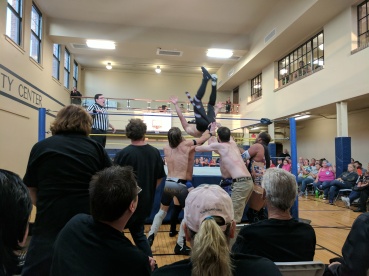 Kripke, Steven Drochner, and Roger Lanier get it started.  This was a lot of fun.  Jared Kripke bumped, jumped, and flopped like a madman, and Adam Bueller was possessed by the spirit of a not-dead Stone Cold Steve Austin.  I sort of imagine Adam falling asleep watching the WWE Network; Stone Cold and his bald head come sliding out of the  TV screen like the girl in The Ring, crawling over to a sleeping Adam, and taking over Bueller’s mind.  Or Adam was just looking for something fun to do.  Look out, here comes the Maltese Tiger!  (pic).  Noah Walker eventually won the match.

Shady Chris Xion took on Shane Foster.  Shady spent a lot of time outside the ring to start the match, frustrating Foster, who just wanted to get it on.  Eventually the two got going, and Xion won after hitting Foster with his necklace / chain.  RCW owner JB Blackwell tells Zion that he was impressed with his win (did he not notice the cheating??? Jeez.) and was awarding Xion a shot at the RCW US Title at the next RCW event.

Douglas Stout, who looks like he could have just stepped off a bus from Wall Street and changed his three piece suit for wrestling gear, decided that taking on Kongo Kong would be a good idea.  Actually Stout got in a lot of offense and stood strong for quite a while, kicking out of many two counts.  But eventually Kong’s size and strength prevailed.  Here we see Stout in the air for two reasons; once because Kong was suplexing him from the second rope, and once because he did not know Kong was about to catch him midair and do more bodily harm. 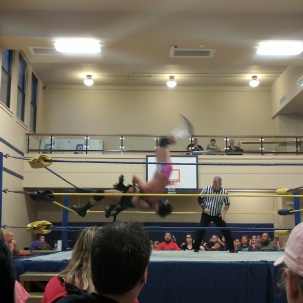 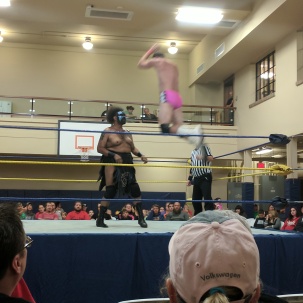 Next up is a match for the RCW Tag Team Titles, featuring Guns & Aggression (Mance Warner and Luke Lawson, the champs) against Lumber & Lightning (JC Bunyan and Lightning Bolt Johnson, not the champs).  Excellent color coordination was apparent on all sides, as the yellow trunks of LBJ and yellow 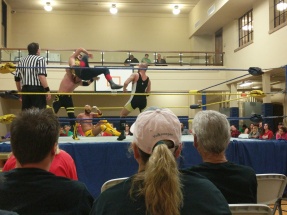 suspenders of JCB not only nicely complemented each other, but also the yellow trim on the gear of G&A.  Well done, gentlemen, bringing a little fashion sense to the ring!  This was a strong match, and everyone worked hard.  Clean living pays off, and Lumber & Lightning get the pin and the titles.  Afterwards, Mance Warner blindsides and clobbers Luke Lawson, who had taken the pin.  Mance exclaims that he’s the man, and doesn’t need Lawson.

After intermission, Warfare Jeremy Hadley pays a visit from the western part of the state to take on Kevin Storm, who holds the RCW US Title.  Hadley was quite angry and spent a

lot of time making sure people in the audience were paying attention to him and the match, and not their phones.   Kevin Storm retains his title, but is attacked after the match by Shady Chris Xion, whose serving notice that he’s ready to take the title at the next show.

Caleb Stills comes out for his match without, sadly, his circus music theme song, but rather a Faith No More tune.  I really liked his old intro music, it was unique!  While he lost that music, he did not lose his attitude; he reminds us all he is the winner of the recent James Wilson Memorial

Tournament, and will be getting a title shot at Anthony Toatele at the next show.  But in the meantime, he’ll beat the person who used to be the title holder, Jack Thriller.  Stills is good to his word, as he gets the win, but only because of a low blow to Thriller while the ref wasn’t looking.  Here (pic, left) is Stills giving Thriller an elbow.

In the final match of the night, the Midwest Monsters take on Dru Skillz and Officer Rod Street.  If you’re counting the number of small children Dru Skillz has made cry during his entrance, when he finds them and growls at them, you can add one.  Rod Street is a victim of his own intended foul play and gets zapped by a taser, and is pinned.  After the match, Brutus Dylan assures us that the Midwest Monsters are back!  I wonder if LBJ and JC Bunyan are second guessing the whole tag team championship thing… 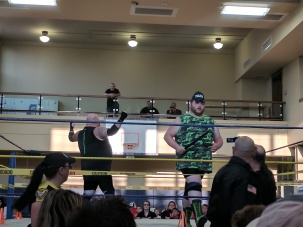 Here we see Brutus Dylan, from back at the start of the show, auditioning for a spot on The Police Department, and Dru Skillz about to use his own partner as a weapon against Tank.

The next RCW show will be on Saturday, September 16th, back at the Battell Center in Mishawaka (which is a good place to see a show!).  The announced matches so far are: