ACW (Acme Championship Wrestling) held the John Hendle Benefit Show at Kankakee Valley High School on Sunday November 12, 207, at 2:00pm CST.  This show was special for the ACW family, as it helped out some people close to the organization.

The show opened with a chorale from KVHS singing the national anthem.  They sounded awesome, good job, kids!  Once they were done, they managed to leave the ring without incident, which was kind of disappointing.  I expected at least one attempted DDT.

Match 2: Jared Kripke defeats Adam Bueller.  Bueller threatens to bore the crowd to death with a five minute headlock on Kripke.  Fortunately Kripke was having none of it.  Below right:  Bueller kicks Kripke. 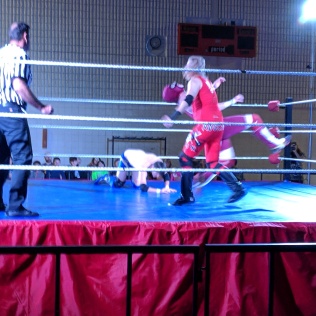 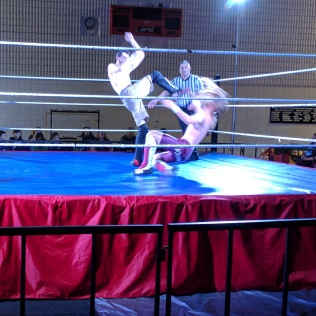 Match 3: Bradley Alexander Dawson, fresh off the golf course, defeats Billy the Kid by cheating!  After the match, Jimmy Holmes is ready to take a picture with a raffle-winning fan in the ring, but Dawson claims it is HIS ring, and if Holmes wants it, he has to fight for it.  Holmes pretty quickly proceeds to turn Dawson’s lights out with a punch, and the fan gets an extra special pose!  Below left:  Billy the Kid getting a hole in one.  Below right: a KO’d BAD poses with Jimmy Holmes, Billy the Kid, and a lucky fan. 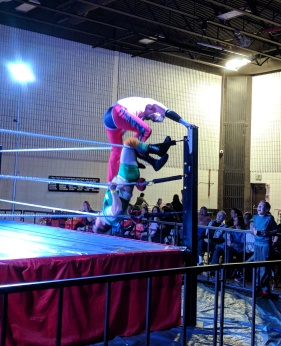 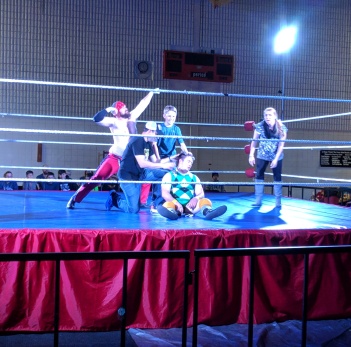 Match 4:  Dave Allen defeats Johnny Motley.  This match went on for quite a while before Allen gets the win.  (That’s a good thing!  The match was a lot of fun, so it was good that it was a long one.) 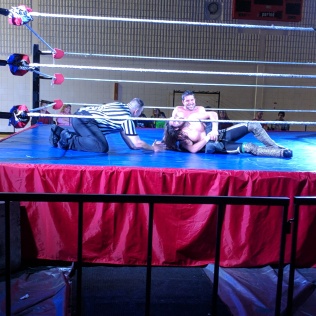 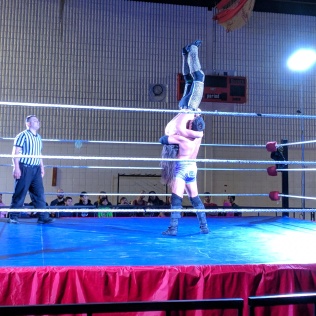 Match 5: Austin Fury v. Quinn Whittock v. Joey Dalton v. Xavier Black.  This fatal four way was fast paced, very exciting, and ended pretty quickly.  They packed a lot of action in, though!  By the time I started thinking, man I should get a picture, Xavier Black was getting the pin!

Both before the show and during intermission, you could tell people were in the wrestling spirit, as chants of “WHAT?!?!” could be heard everywhere.  Now, this was likely because the house music was set to ear splitting levels making it near impossible to carry on a conversation, but still…. 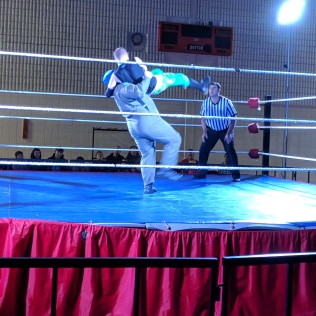 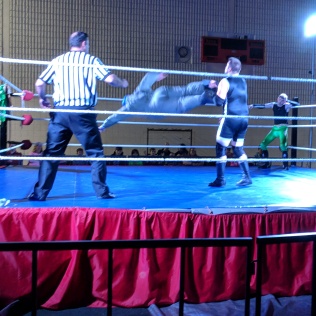 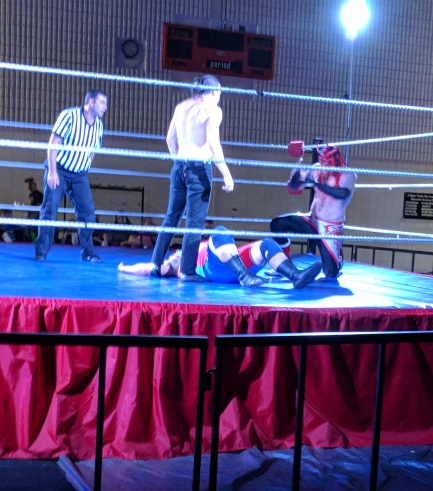 Match 8: A match years in the making!  Dueling Facebook promos boiling over and broadcast by the media juggernaut of WVLP!  It’s Jeremy Hadley vs. Tristin Hayze.  The intensity of this did not take long to ramp up to 11, as the two combatants tore into each other outside the ring before the bell rang.  They went at it around the ring, in the chairs, up the bleachers, over towards the concession stand, and into the cinderblock wall.  Ref Jeremy Tillema called for extra muscle from the back to help get them separated; the extra muscle hustled out and stood watching, like “yeah, those two are really going at it, huh?”  You were a big help, thanks, guys!  Once they got in the ring, they battled back and forth until Hayze finally came out on top after a kick to Hadley’s noggin.  Below left: It’s a bird!  It’s a plane! It’s Warfare Jeremy Hadley!  Below right:  Ref Tillema gets help from the timekeeper, as the timekeeper drags the prone Hadley out of the ring by grabbing his wrist and sliding him slowly towards the edge.  I’m pretty sure that’s not proper Red Cross First Aid procedure for handling an unconscious person with a possible head or neck injury, but I guess that’s why they all sign waivers. 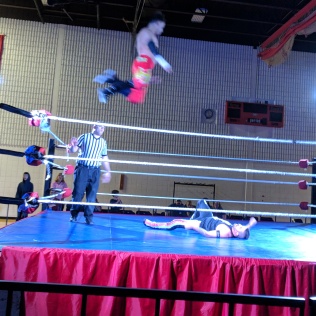 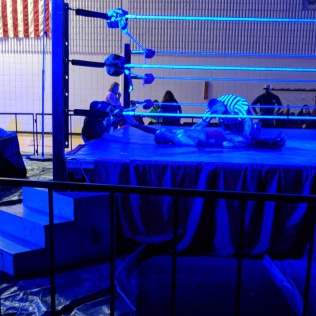 My inside sources (hey, Jeremy!) report that attendance was likely a bit over 200.  Good work for charity!

I think the next ACW show is Winter Warfare 5, and it should be coming up on or around December 9.  I’ll edit this when I come across more specific info.  I know I’ve seen something about it, but I wasn’t smart enough to save it on Facebook.

Also, the Demotte Boxing Club – sort of home base for ACW training – is having a fundraiser sparring night on Saturday November 18 at 6pm, at Lincoln Elementary School in Roselawn, IN.