This show was rescheduled from the previous Friday Feb 09 because the weather had pulled a heel turn and blindsided the region with repeated heapings of snow, one on top of the other.  My 40 minute drive to DeMotte was much more pleasant for the new night!  The DeMotte Boxing Club is what you’d call an “intimate venue” for a wrestling show, with seats around all sides of the ring in very close proximity.  The action was up close and personal.

The first match was Kujo vs. Intercontinental Champion Xavier Black.  Kujo gave Black a lot of taunting, but Black is the strong silent type and let his actions speak.  He must like to talk with his feet, because you can see Black’s foot is saying hi to Kujo’s midsection, and later on his head.  Black eventually won with shenanigans, a roll up with a pull of the tights. 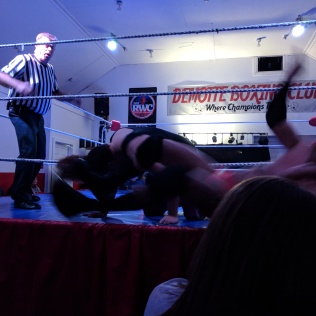 Before the next match started, we were introduced to the debut edition of the Caviar

Casino!  Cliff Caviar and his lackey TK Zero came out with two stools, personalized pillows, and a small rug to set up the ring.  Caviar began by introducing his guest – his Tough Man Championship Belt!  Soon, Crimson Dynamo (who used to hold the belt and must think it is due more respect than this)  came out and attacked.  A brawl ensued, and GM Michael Allen proclaimed the start of a 6-man tag match featuring Cliff Caviar, TK Zero, and Dave Allen vs. Crimson Dynamo, Billy the Kid, and Arun (?).  This match had a couple of nice sequences where each person got to come in and hit a move of some sort, before getting clobbered by the next guy.  (Below left, Caviar drops a luxurious elbow on Arun while TK Zero does his best Bigfoot impression.  Aaarrrrrr!  Below right, TK Zero attacks!) 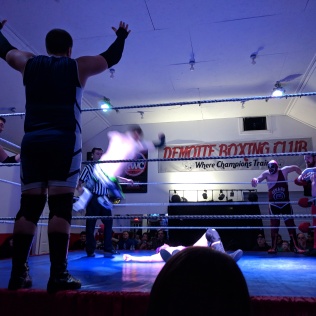 Next up, Mr. 3% Jon Hudson made his ACW debut by taking on Bradley Alexander Dawson, B.A.D. Dawson spent a lot of time hiding, I mean, strategically placing himself outside the ring.  He did get in a bit of offence, as you can see (below left), but he was only able to delay the inevitable for a short time, and Dawson was eventually was pinned by Hudson.

After intermission, Thomas Keith took on Rockstar Jonny Nigh.  In the picture above / right, Nigh is the one who’s sideways.  Rockstar got the win with his sit-out Pedigree type thing that I don’t know the name of!

Match number five was a triple threat match between Jared Kripke, Austin Fury, and X-calibur for the spot of Number One Contender to the IC Title held by Xavier Black.  I believe the pre-match planning went something like this: “Oh, you thought the ladder match between Rick Raid and Nacho Del Silver had painful looking spots?  Hold our beers!”  There was some serious smacking, bumping, and flying going on in this match.  Even Fury had to stop for a breather: below, left.  While Fury was out of the way, Kripke and X-calibur kept going at it.  Below, right, Kripke is about to land on X-calibur. 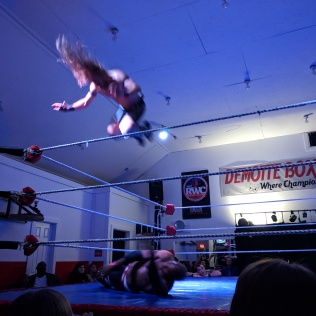 The “ouch!” moment of the night came when Kripke went for a suicide dive between the ropes out onto Fury and X-calibur, while both simply stepped aside.  Kripke made quite a loud THUNK on the hard floor.  My viewing partner, Ref Extraordinaire Jeremy Tillema, and I could not see the landing from the opposite side of the ring, but we definitely heard it.  (I also heard in my mind Mauro Ranallo calling, “What a tope suicida, mama mia!!”) There were also other dives to the outside, and a triple powerbomb.  Later on, Kripke wrote,

The match ended with a pull apart brawl involving wrestlers from backstage.  Credit to Jeremy Tillema (see, that’s why he’s a ref, because he pays more attention to the details!) who helped me remember that the outcome of this is a four-way match with these three and Xavier Black at the next ACW show.  I am not sure what Xavier Black thinks of this development.

And the main event of the evening featured World Champ Drex O’Dell vs. challenger Johnny Motley.  O’Dell overcame not only Motley but the vicious taunts of “marshmallow!” from kids in the audience to retain his title.  Who is left to unseat O’Dell??? 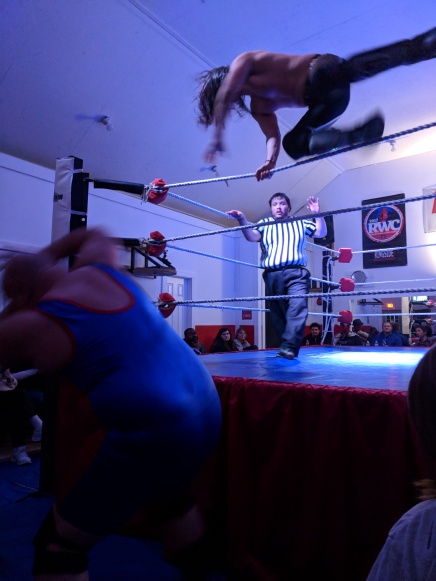 If you’re desperate for something to do, check out the Northwest Indiana Wrestling Action Program (NWIWRAP) broadcast Sundays at 9:15pm, right after Mostly Metal, which runs Sundays from 8:00-9:15pm CST, on WVLP 103.1FM in Valparaiso, IN.  If you’re not in Valpo, catch it streaming on http://www.wvlp.org and the Tune In Radio app.  Rebroadcasts happen Wednesdays 10pm – midnight, and NWIWRAP is archived on YouTube, just search for NWIWRAP.  You can find @nwiwrap on Twitter.  And you can subscribe to the nwiwrap.wvlp@gmail.com Google calendar, where I try to keep up to date calendar postings of shows in and around the NWI region.  Because WRESTLING!