ARWPRO held a fundraiser for Morton High School at that location at 7:00pm CST, Saturday April 14.

You know, sometimes you just want to sit and enjoy a show rather than taking notes and worrying about getting too many pictures.  So this recap is a bit spotty, but here we go:

Match 2: Anthony Toatele defeated Dave Allen in a fun back & forth match.  This is Dave Allen making all the blood rush to Toatele’s head:

Match 3: Originally scheduled as the Mexecutioners vs Aggravated Assault for the ARW Tag Team championship, this match was rearranged due to some travel difficulties or what not, to become Machine and Johnny Showtime (rather than Santana Starks, thus not the actual Mexecutioners) vs Punisher 747 and Maverick Cage (rather than B.O.W., thus not the actual Aggravated Assault).  I guess you could say we got “close enough”, i.e. maybe the Texecutioners vs Slightly Irritated Assault?  Anyway, Machine and Johnny Showtime got the win, and Joey Boom Boom awards them the Tag Team Titles, until Chazz Moretti points out that the contract for the match said that the Moretti Agency would be facing “The Mexecutioners”, and so since they did not actually face that team, this should have been a non-title match.  ARW owner King Bishop reluctantly agrees.  But it’s on for sure at the next ARW show on May 12.  This is Maverick Cage getting kicked in the face by Johnny Showtime: 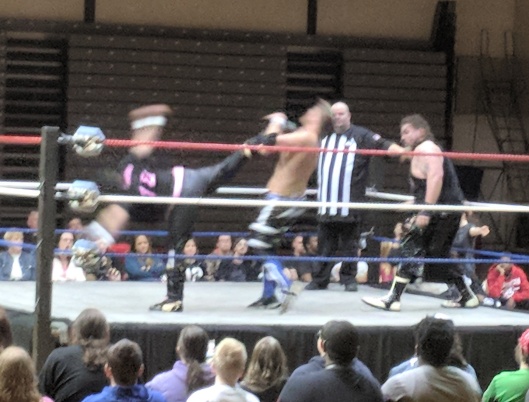 Stacey Shadows is snowed in, and so Moxie Mollie instead takes on Dementia DeRose (I think?) for Mollie’s ARW Women’s Championship.  DeRose eventually just gives up trying to win fairly and begins a long choke-hold on Moxie Mollie, with a couple of shoves of the ref thrown in for good measure – so she gets DQd.

Guest star Marshe Rockett defeated Nick Cutler in my favorite match of the night.  Both men were really good at getting the crowd involved.   Yes, Mr. Cutler, it is too late to get out of the way of Marshe Rockett’s boot that is about to introduce itself to you.

Ivan Manson and Max Holiday were set to face The Family, with Charlie Junior assembling the team of Old School Manson and a mystery partner … who turns out to be Drex Odell!  There was a lot of mass in the ring for this match, and the ring ropes tapped out for their own safety … at least the second one did: a bump into a corner resulted in one of the turnbuckles.  But all four gentlemen carried on valiantly, and Drex Odell even managed to get up to the top rope for a moonsault … which missed, ha!  That’ll teach him to join The Family.   Here is his missed moonsault, along with the suicidal ring rope:

After getting tossed out of the ring like refuse (look, I used a British term!), Drex Odell re-enacts a scene from The Wizard of Oz: 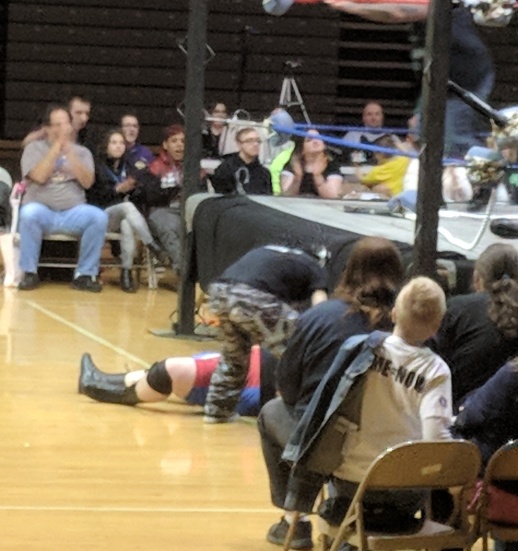 The next ARWPRO show is Saturday May 12 at Edison Junior-Senior High School in Lake Station, IN.

If you’re so inclined, check out the Northwest Indiana Wrestling Action Program (NWIWRAP) broadcast Sundays at 9:15pm, right after Mostly Metal, which runs Sundays from 8:00-9:15pm CST, on WVLP 103.1FM in Valparaiso, IN. If you’re not in Valpo, catch it streaming on http://www.wvlp.org and the Tune In Radio app. Rebroadcasts happen Wednesdays 10pm – midnight, and NWIWRAP is archived on YouTube, just search for NWIWRAP. You can find @nwiwrap on Twitter. And you can subscribe to the nwiwrap.wvlp@gmail.comGoogle calendar, where I try to keep up to date calendar postings of shows in and around the NWI region. Because WRESTLING!