This is intended to be very brief, but I wanted to get it out there in case it actually comes across anyone interested in the second night of this two night ARWPRO engagement.   My usual recaps are called “Outside the Ropes”.  This is a fraction of the length of a usual one … what do you call something that’s very short and leads nowhere?  One Count!  Now when I get tired of writing longer recaps, I have a name ready for short ones.

Anyway, ARWPRO is having a two night exhibition at Live in the ‘Ville, Hessville’s fourth annual summertime street festival.  The portion of Kennedy Ave between 169th and 165th is blocked off, and it’s pretty fun to walk up and down a road that’s usually a four lane main city artery.

The first half of this exhibition was on Friday June 01, 2018 at 6:30pm, and the second night is Saturday June 02, same time.  The first night had three matches (well, there was a “pre show” match between a dinosaur and a chicken, and I think the chicken won, but that doesn’t count … the chicken did not have merch and obviously isn’t serious about this business).

If this comes across your screen and you aren’t doing anything else Saturday June 02 (which is tonight! as I write this), go support ARWPRO and Hessville’s street festival.  Besides wrestling, you can find arts & crafts, street performers (we saw hula hoop people and fire jugglers), music, and yummy food – pierogies, pretzels, elephant ears, BBQ, beef sandwiches, hot dogs, tacos, and so on.  There’s a beer tent, too! 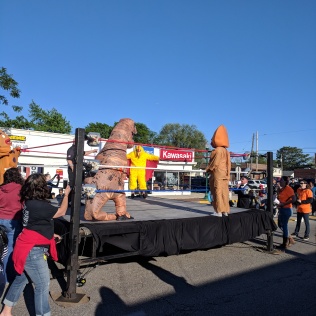