I had no idea what to expect from a “Rust Belt Rebellion” auto show in Shelby, IN, especially since I had never been to Shelby, and the address on the flyer for the show was not something like the Lake County Fairgrounds or other municipal location, but looked just like the address where Amazon would deliver new socks to some dude’s house.  Google was no help whatsoever, as it kept wanting to redirect me to the Indianapolis area.   Luckily, on the approach to Shelby, there was good signage to the Rust Belt Rebellion; the signs directed me to a residential street and …. holy shit, this thing is at some dude’s house!  Cars of attendees were parked up and down the street.  Some neighbors had “no parking” signs near their curbs.  But wait, it got really interesting.  The property behind the house opened up into a large partially cleared forested area that was set up with a lot of permanent structures to host this event, or other events like it.  It was like a mini Renaissance Fair lot, but for tattooed men with cars instead of for nerds with plastic swords.  There was a playground for kids with the features built from car parts and with an auto theme; there was a replica gas station front (pictured below), there were a couple of open structures for food sales.  And, at the heart of it all, there were a couple of open areas where people had lined up their old cars and popped the hoods for others to gawk at.  And finally, towards the back, was the wrestling ring! 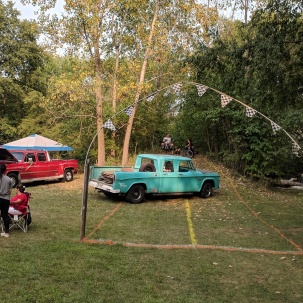 The first match was X-Calibur vs Thomas Keith.  Apparently Thomas Keith does not like being in Shelby, and he made that clear to the crowd.  During the match, Ref Zoran got clobbered and fell down. Keith grabbed a water spray bottle and sprayed the ref to help revive him; during the confusion, X-Calibur got the upper hand on Keith and got the win.  (Below left, Keith suplexes X-Calibur off the turnbuckles.)

The second match was started at the insistence of Billy the Kid, who is still pissed at Phantasmo for events at the last show which closed out ACW’s “school year” earlier this summer, School’s Out.  GM Michael Allen agreed that Billy the Kid deserved a match; Phantasmo came out and they got started.  Below right. Phantasmo finds himself in a precarious position.  But. eventually Phantasmo won; this did not make Billy the Kid happy, and the two went at it again, resulting in a pull-apart brawl that required the ACW security guards and wrestler Arun to separate (this picture is a couple of paragraphs below, left).  I think we can expect more from Phantasmo and Billy the Kid.

There was a little girl in front of me who saw the guy at ringside recording video, and asked her mom, “Are they recording for TV?”  I’m glad kids still know about TV and not just YouTube.

Kujo came out for his match against Cliff Caviar for Caviar’s Tough Man Championship.  As Caviar came out, he had his “Insurance Policy” TK Zero with him, as always.  As they circled the ring, Kujo jumped out and knocked TK Zero into the guardrail, neutralizing him at least for a while.  Smart!  But, this only paid off temporarily.  Below right, Kujo was not impressed by Caviar’s right hook, and so shows Caviar where he could hit him a second time.  Later on, Kujo had Caviar knocked loopy; TK Zero entered the ring, hit Kujo from behind, and dragged Caviar onto the prone Kujo so that Caviar got the three count.  All this happened in full view of the ref,  but the Tough Man rules have a no DQ stipulation, so the ref can do nothing but count. 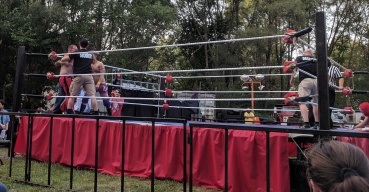 After this match cleared out, TK Zero remained in the ring for his scheduled match against Jesus, er, rather, Dakota Prodigy – who is nicely rocking the long hair and beard now.  Below left, TK Zero tries to squeeze Dakota through the guardrail early in the match.  Dakota didn’t get in a lot of offense, and was pinned pretty quickly after he tried to get the upper hand with a jump off the top rope shown below, right. 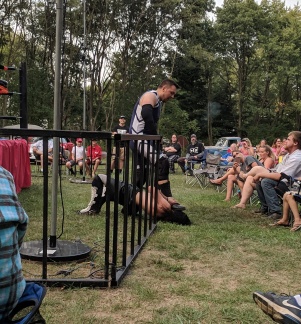 Next up, hometown hero from Shelby, Crimson Dynamo, took on Kyle Cross.  Not only did Cross have to defend against Dynamo, but also from a kid who’s mom came up with a megaphone for the kid to shout with.  (I don’t think the boy had or used it up until this point.)  Dynamo won the match when he caught Cross with a right cross out of the blue.  Below left, the ring lights give Cross a spooky glow; right, Cross gives Dynamo a neckbreaker across the top turnbuckle.

The Top Gunns made their ACW debut against Kyle Kaylor and Venom.  Venom was a masked wrestler whose mask looked exactly as you’d imagine it would for a wrestler named Venom.  The Top Gunns coordinated well together for some fun offense on their way to victory, and developed a new number one fan in the front row who basically demonstrated he was having a religious experience from the match! Below left, Highball dropkicks Kaylor.  Below right, Ace is carrying and is about to backdrop both opponents at the same time!

The second to last match had Dave Allen taking on Arun.  I think Dave Allen’s Grandmother was in attendance; I mean, he kept calling one woman in the crowd “Grandma”, and if she wasn’t really his Grandmother, that would have been totally disrespectful.  A small boy kept getting more and more upset with Allen’s words and antics to the point of tears.  Poor kid.  Below left, the action is outside of the ring.  This match had a nice intensity to it; somehow Arun got a cut on the top of his head and had blood on his face, which gave a really good extra look to the match.  (Per Facebook posts, it seems he needed stitches … hope you heal up nicely, Arun!)  Arun did get the win with a surprise roll up.  Below right, you can see the true face of disappointment. 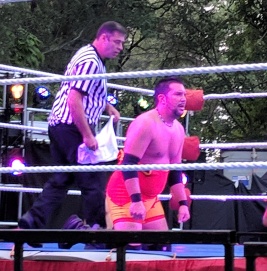 The main event was Rockstar Jonny Nigh defending his ACW Heavyweight Championship against Xavier Black.  Below left, Nigh is escaping from a headlock, and below right is celebrating with his fans after his successful title defense.

The next ACW show is coming in late September, be sure to give a Like to the Facebook page “ACME Championship Wrestling – ACW” for updates.

If you’ve read this far, you might like wrestling?  So maybe, check out the Northwest Indiana Wrestling Action Program (NWIWRAP) broadcast Sundays at 9:15pm*, right after Mostly Metal, which runs Sundays from 8:00-9:15pm CST, on WVLP 103.1FM in Valparaiso, IN. If you’re not in Valpo, catch it streaming on http://www.wvlp.org and the Tune In Radio app. Rebroadcasts happen Wednesdays 10pm – midnight, and NWIWRAP is archived on YouTube, just search for NWIWRAP. You can find @nwiwrap on Twitter. And you can subscribe to the nwiwrap.wvlp@gmail.com Google calendar, where I try to keep up to date calendar postings of shows in and around the NWI region.

* or 9pm, or 9:30pm, or anytime before or after, depending on how much stuff there is to cover!