… also known as, “TK Zero beats more people up and gets paid, best night ever!”

… more accurately known as, “TK Zero gets beats up, but at least he got paid!”

ACME Championship Wrestling held Franklin Fight Night at 7:00pm on Friday April 21, 2017 at Clark High School in Whiting, Indiana (Hammond? I’ll let them fight about where one ends and the other begins).  This was a fundraiser for Franklin Elementary School.  Wrestlers:  they’ll punch you in the face, but they’ll also help raise money for your kids! 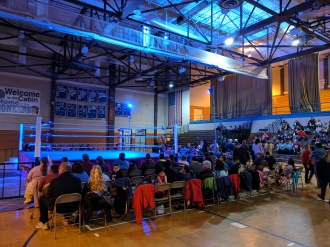 The show started with Drex O’Dell out to complain about GM Michael Allen making him jump through hoop after hoop before being granted a title match against ACME World Champ Austin Fury.  Michael Allen says title shots have to be earned, and O’Dell isn’t done earning his.  Allen has brought in a new competitor to try out Drex O’Dell – Excalibur!  Drex O’Dell eventually overpowers Excalibur for the win.  Is Drex any closer to a title shot now?  We’ll see!  Now the very next night on April 22, there was a Pro Wrestling King show a couple of counties east.  That PWK show was called Camelot.  Was Excalibur on that card?  If Excalibur did not appear at Camelot, that would be disappointing.

Next up was an entertaining 6-man tag match:  TK Zero, CK1, and Cliff Caviar vs. Jared Kripke, Kyle Kaylor, and Crimson Dynamo.  (Cliff Caviar should change his nickname to CC2, so his team would be TK Zero, CK1, and CC2.  Think of the possibilities!)  After some good action and bodies flying through and off ropes, the good guys take the victory when Jarek Kripke pins Cliff Caviar.  TK Zero did get in some good beatings as he promised, but ended up on the losing side.  Sorry TK!

Dakota Prodigy challenged ACW Intercontinental Champ Xavier Black for that title. Dakota may have been getting the edge in this back-and-forth match until the ref got bumped and Black took the opportunity to deliver a low blow.  Dakota could not recover from that, got pinned, and now has to get different sheet music in his church choir.

With issues unresolved from their match in March, Flawless Dave Allen and Rockstar Jonny Nigh got set to battle again.  Once more, Allen came to the ring carrying a bass guitar.  As he looked about to start into another song specially written for Nigh, Jonny suggested that he should have a chance to sing instead.  Now normally I would be cheering for the Rockstar, but we were robbed of another Dave Allen Opus!  Shame! Allen was bothered, too, because he clobbered Nigh before Nigh got a chance to shine.  Late in the match while the ref was distracted, Allen picked up the bass, tossed it so that Johnny Nigh caught it, then fell to the mat acting as if Nigh had struck him.  When the ref turned back and saw Allen on the mat with Nigh holding the murder weapon, he DQ’d Nigh.  Dave Allen is a genius! Nigh had enough, and challenged  Allen to a “Rockstar Rumble” at the next event on May 5.

The Teacher Royal Rumble happened next.  In this event, a bunch of teachers, aides, and safety officers from Lincoln Elementary (and Clark High?) got into the ring.  You have not lived until you hear a gymnasium full of elementary school kids screaming while their teachers beat each other up.  This match was a lot more fun than it should have been, and the three final competitors made a good showing for themselves!

Rod Street defeated the Maltese Tiger after spraying him in the eyes with mace, while the ref was distracted by Lt. Eva Lonis.   Rod Street matches are always fun, but you know how they go…

Jeremy Hadley challenged Austin Fury for Fury’s ACW World Championship.  This match contained some serious old school build-up, as Hadley worked on Fury’s leg and knee very consistently through the match.  Fury battled through it, though, and ended up 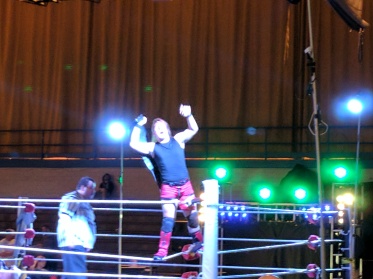 retaining his title.  Great match!  However, after the match, Drex O’Dell snuck out to ringside and battered the champ, threatening to do even more damage unless granted his title match.  GM Michael Allen had no choice but to acquiesce.  And so Drex O’Dell will take on Austin Fury for the title at the next ACW event, which is Friday May 5, 2017, at Lake Village Elementary School in Lake Village, IN.