Backbreaker Wrestling held On the Ropes at St. Mary’s Hildebrandt Hall in Griffith, IN on Saturday April 21, 2017, 6:00pm CST.

Note to self: Right down the road from this venue is Twincade, a pub filled with arcade games.  I need to go there the next time Backbreaker has a show in Griffith.  But they are not helping me out, as their next show is in Hobart, not Griffith, argh!  (See below.)

For this show, I brought recording gear and have an audio recap captured as the show was taking place.  It will be broadcast during Mostly Metal & NWIWRAP, which runs 8:00 – 10:00pm Sunday night April 22 on WVLP, 103.1FM in Valparaiso (streaming on http://www.wvlp.org).  It will be rebroadcast at 10pm on Wednesday, April 25.  And at some point soon (i.e. when I get around to it), it will be made available on the NWIWRAP YouTube channel, and I’ll hopefully remember to put the link here!  But in the meantime, here is a very brief recap and some photos:

Kevin Crowley is up on Johnny Motley.  Davis stands on Motley after his interference: 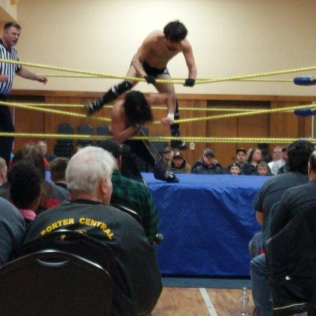 The Bambino brothers chopping Dave Allen.  Dave Allen saying, “Look, I’m a wacky waving inflatable tube-man!!”  Or, Allen and Rojas leaping out of the corner just as Dom Bambino goes in for a spear.

The Ice Pick Vic Capri about to give Brently Alexander Dawson a rude landing:

TK Zero gives Trog the Caveman “thumbs up” for how he was biting his opponent.  Shooter McGavin has gone around the ring and shown off his chest hair to each direction of the crowd.  Lucky us!

The next Backbreaker Wrestling show is “Famfest”.  It’s at 3:00pm June 16 2018 at Cornerstone Community Church in Hobart, IN. The event also has live bands, concession stands, and activities for the kids like a bounce house and obstacle course.

If you’ve read this far, you might like wrestling?  So maybe, check out the Northwest Indiana Wrestling Action Program (NWIWRAP) broadcast Sundays at 9:15pm, right after Mostly Metal, which runs Sundays from 8:00-9:15pm CST, on WVLP 103.1FM in Valparaiso, IN. If you’re not in Valpo, catch it streaming on http://www.wvlp.org and the Tune In Radio app. Rebroadcasts happen Wednesdays 10pm – midnight, and NWIWRAP is archived on YouTube, just search for NWIWRAP. You can find @nwiwrap on Twitter. And you can subscribe to the nwiwrap.wvlp@gmail.com Google calendar, where I try to keep up to date calendar postings of shows in and around the NWI region.